EPP pneumatic sewage pneumatic station is device for pumping sewage with compressed air which refreshes the sewage and prevents putrefying during transport.

These are complete and fully automated installations, which do not require any constant operation by technicians. They are intended to pump municipal waste in pressure sewage systems, in a wide range of capacities and delivery heads solely with the use of compressed air: a system without any pumps.

In addition, the EPP pneumatic sewage lift station (pneumatic ejector) has been created in order to minimize air consumption (it is equipped with a special system of saving and recovery of air), so that the overall energy efficiency of the whole system is higher than in other lift stations with separation of solids.

Production and sale of such a product as the EPP pneumatic lift station complements the niche market for the product giving new functional and utility values.

Our sewage  pumping station brings a new quality to its operating and characteristics of work. The EPP pumping station satisfies specific needs of customers and strengthens SZUSTER system’s brand image, which emphasizes on innovation.

In comparison with traditional systems with submersible pumps our product provides many benefits.

Used in EPP pneumatic pumping station innovative SZUSTER system ball check valves, instead of gate valves with pneumatic drive enables a significant increase of operation cycles and the associated viability of the whole system. It also causes limiting of space required for installation of the device and the related lower investment costs.

The EPP pneumatic pumping station constitutes a complete and fully automated installation. The operating principle of the EPP pneumatic pumping station consists in a cyclical and alternate occurrence of two operating phases of the pumping station: the filling phase and the pumping phase. In the filling phase, sewage flows to the vertical external pipe retention chamber; from there, it flows through the inflow well to the working chambers through open inlet valves. The outlet valve is open so that air could be released from the working chambers, while all the other valves remain closed. Once the working chambers have been filled with sewage, waste continues to accumulate in the inflow well and in the pipe retention chamber. Once the adequate level of sewage has been reached in the pipe retention chamber, the sewage pumping phase is switched on, which continues until the switching off level has been reached.

After the completion of the compression phase, the system enters the filling phase. These cycles are repeated, and air is alternately forced into the working chambers until the level of sewage in the retention chamber has reached the minimum. 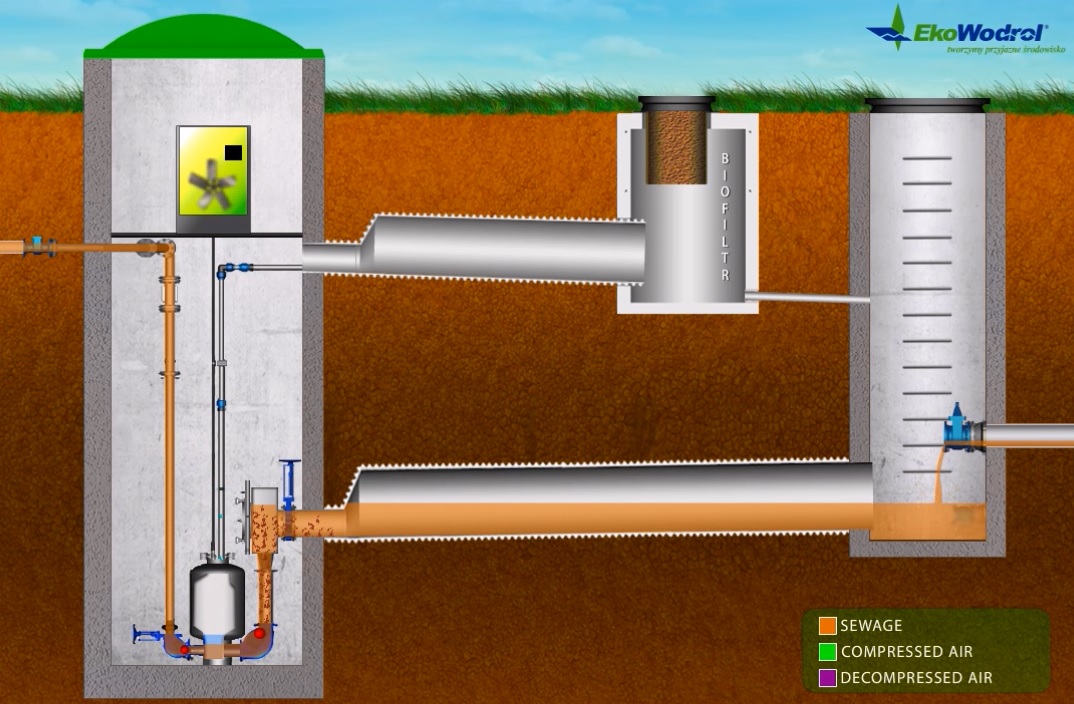 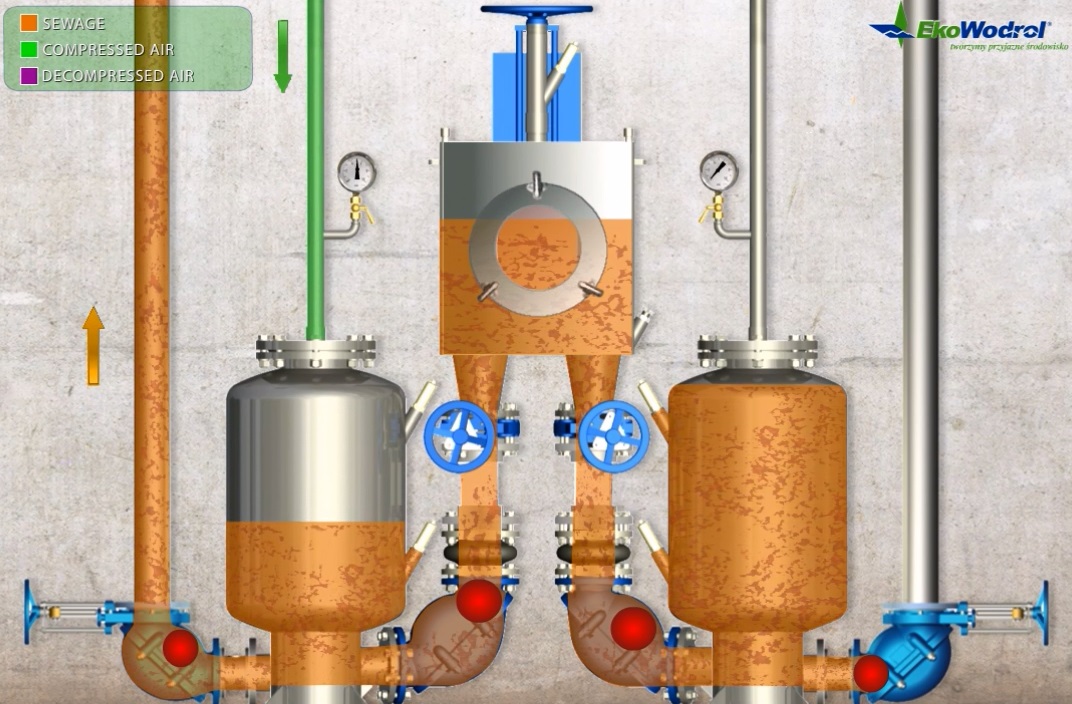 One of the chief advantages of the EPP pneumatic pumping station is the function of periodical (e.g. at night) entire emptying of the pressure conduit from sewage using compressed air. In this manner, excessive putrefying of sewage in the pressure conduit is prevented, and odors that are hazardous to human life in the release wells are eliminated.

We are using cookies to give you the best experience on our site. Cookies are files stored in your browser and are used by most websites to help personalise your web experience. By continuing to use our website without changing the settings, you are agreeing to our use of cookies. More Information. | © 2018 SZUSTER system. ALL RIGHTS RESERVED.